Dear football fans in the world!

Each intact Association strives to succeed and reach its goals following the own values and standards. Our fan club, the EFC Bembel Beduinen, is certainly no exception.

We have formed or fan club because we are loyal Eintracht Frankfurt fans. Living far away from home we want to indulge this commitment and passion with like-minded people.

Moreover, our fan club wants through our team Eintracht and football contribute to much more tolerance, acceptance, and coexistence in our world.

I. The EFC Bembel Beduinen is launched

A challenging career opportunity led me in the fall of 2011 to Dubai. Arriving in the desert all on my own I was looking for some home-like ports. Soon I found a German troop of football enthusiasts. Together we watched the Bundesliga live every week at the noble Ritz Carlton in the Marina. Being the only confessed Eintracht fan I did not have too much to laugh at. We have written the season 2011/2012. Diplomatically to say we stayed away from the highest German Football League, the Bundesliga, in the implied season.

Since 1988 I am a loyal Eintracht fan. Hence, for decades I know what it means to suffer referring to the capricious diva from Main. But my Eintracht heart whispered constantly: The Eintracht eagle will rise again soon! During the goal rejoicing of the others, I vowed that my Eintracht will show its flag here in the blink of an eye and very heavily one at that.

My friend Johnny Klinke, owner of the most famous German variety Tiger Palace and a galactic big Eintracht fan, already told me about the diverse activities of fan clubs. So I had just to find appropriate comrades to call such a fan club to life. 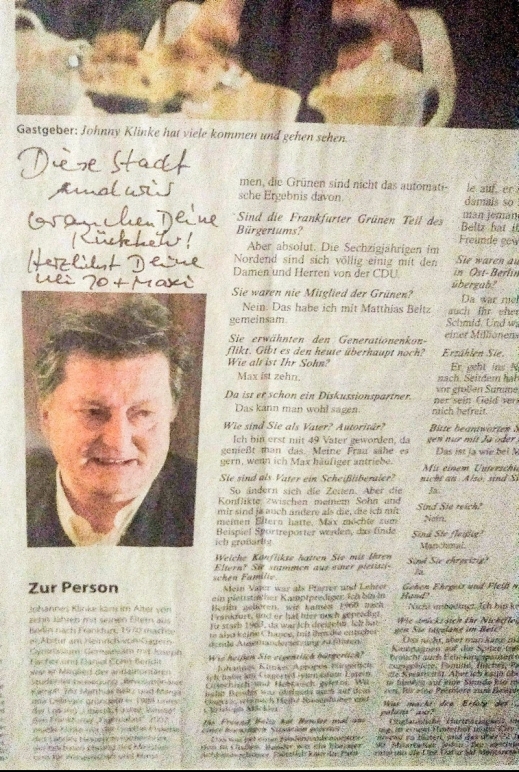 The “Tiger Palace” in Frankfurt

And the football gods just loved us! Namely, since January 2013 the SGE spends its winter training camp regularly in the United Arab Emirates. On such a stage we came together naturally focused.

Referring to the foundation of our fan club, well, apparently the memories are drifting apart – ex-post. The fact is we established ourselves on 24. January 2013. Just a few weeks later on February 23 the title “official fan club of Eintracht Frankfurt” was awarded to us by the Managing Committee of the EF FanClub Registered Association. Since that day, we appear on the world-wide scene under the brand “EFC Bembel Beduinen”.

All startup is difficult – says the German vernacular. The statement is right. You can read in more detail here: decisions of the EF FanClub Registered Association.

Henceforth, free referring to a German saying “everything is honkey-dorey”, by the EFC Bembel Beduinen all is in “grie Soß” (Frankfurter green sauce) and “Ebbolwoi”! (Frankfurter apple wine) Meanwhile we have become a charmingly called, internationally-oriented, adorable colorful, consisting of successful members, sworn, legendary troupes of the seductive and mysterious 1001 nights. As a guideline, designed for our actions is the following corporate identity.

First and foremost the Bedu’s declare themselves as loyal fans of our Eintracht Frankfurt forever!

Because we are far away from home we cannot make it our primary activity to visit the Eintracht games at the Waldstadion or on the road. We watch the Adler matches mostly through the Internet. Unfortunately the seven herbs for our favorite dish “grie Soß” (green sauce – also in Frankfurt born Johann Wolfgang von Goethe’s number one dish preferable made by his mother) we cannot get it together locally. But thank God the inimitable Frankfurter apple wine is available in the UAE! So after any Eintracht goal, we can “riffele” (to touch glasses) with the original Frankfurter “Schoppe” (one apple wine glass) filled with our uniquely “Ebbelwoi”! (apple wine)

In particular, if you spend a long time abroad and then every day dealing with other customs and traditions, popular, ingrained prejudices about others must always appear nonsensical. So, in an equally euphoric dimension, as we cheer on our team, we want our Eintracht and thus use football to break down prejudices and bring people together through this wonderfully unique sport. It doesn’t matter which origin your football friends own, all together you can get so gloriously upset about the “blind referee”, because he once again didn’t whistle a clear offside position. Or after a goal to high-five the team together.

Those are the important questions of life, instead of groundless, blind hatred, the terror against alleged dissidents !!! In our mother earth, we have for a very foreseeable future only one globe to share. And the ball is rolling everywhere because as you know it is round!

So, as EFC BEMBEL BEDUINEN we condemn:

Any form of racism, xenophobia, misogyny, and any kind of violence!

As EFC BEMBEL BEDUINEN we claim:

– as many people as possible, positively conveys Eintracht’s open-mindedness and the principles of tolerance.

– through the football permit direct contact between various people.

– break down prejudices and fear between unfamiliar people.

– in our umbrella organization to take an active role. We want to promote with other EF fan clubs and fan clubs of teams worldwide in by our corporate identity for our common goals.

– a permanent presence in public life, to be among decision-makers, to keep a fruitful dialogue with everyone.

– be adequately represented in the international media with our views and aspirations. According to Scripture, “a city that is set on a hill cannot be hidden.”

These are our fundamentals we stand for as EFC BEMBEL BEDUINEN to put heart and soul into it.

And when our SGE becomes the German football champion – Eintracht heart, what more do you want??? But okay, with a place in the standings for a Champions League participation we can even arrange that, too 🙂 And if our Eintracht brings again the DFB Cup, then “des Stöffche” (apple wine) consumption will shoot up to a new record level high …

That’s how it is, our charmingly called, internationally-oriented, adorable colorful, consisting of successful members, sworn, legendary troupes of the seductive and mysterious 1001 nights!

Deutscher Meister wird nur die SGE! / German champion will be only the SGE!